16. In RDBMS , the constraint that no key attribute (column) may be NULL is referred to as:
(1) Referential integrity
(2) Multi – value dependency
(3) Entity Integrity
(4) Functional Dependency
Answer : 3

17. Which of the following statement(s) is/are FALSE in the context of Relational DBMS?
(I) Views in the database system are important because they help with access control by allowing users to see only a particular subset of the data in the database
(II) E-R diagrams are useful to logically model concept.
(III) An update anomaly is when it is not possible to store information unless some other unrelated information is stored as well
(IV) SQL is a procedural language
(1) I and IV only
(2) III and IV only
(3) I II and III only
(4) II,III and IV Only
Answer : 4

18. Ina relational database model , NULL values can be used for all but which one of the following?
(1) To allow duplicate tuples in the table by filling the primary key column(s) with NULL.
(2) To avoid confusion with actual legitimate data value  like 0 (zero) for integer column and ‘’ (the empty string) for string columns.
(3) To leave columns in a tuple marked as “unknown” when the actual value is unknown.
(4) To fill a column in a tuple when that column does not really “exist” for that particular tuple.
Answer : 1

20. Consider the following database table having A,B,C and D as its four attributes and four possible candidate keys (I,II,III and IV) for this table : 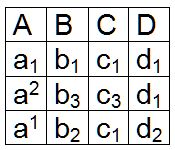