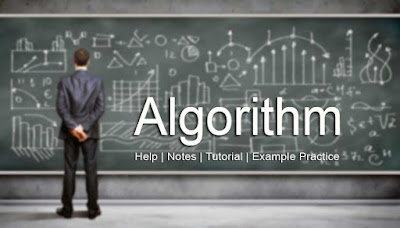 
As we know in computer a problem is solved step by step not once. So there is a need to instruct computer how to solve a specific problem step by step with the help of algorithm.

An Algorithm is an approach which helps to write down a solution of any problem solving in step by step. Being a programming if you are making code of any problem directly on computer then it causes time consuming, exhausted process.

Algorithm is design by the expert is a mathematical step by step way to accomplish some programming task. You can measure the time and space complexity of an algorithm which helps in decision making that which algorithm is best for our problem. Algorithm standardizes programming activity.

Let's say that you are going somewhere and heading to airport, after landing your destination you need to get reach airport to your hotel. So here are four different algorithms that you might use for getting to your hotel:

All four of these algorithms accomplish exactly the same goal, but each algorithm does it in completely different way. Each algorithm also has a different cost and a different travel time. Taking a taxi, for example, is probably the fastest way, but also the most expensive. Taking the bus is definitely less expensive, but a whole lot slower. You choose the algorithm based on the circumstances.