III. Two successive scaling operations are multiplicative.
(A) I and II
(B) I and III
(C) II and III
(D) All the above

63. Given below are three basic rules :
I. Squash and Stretch
II. Slow-in and Slow-out
III. To stage the action properly
These rules are applied in case of
(A) Rendering
(B) Morphing
(C) Animation
(D) All the above 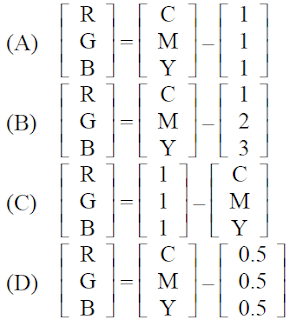 69. To place a sound into a word document, following feature of windows is used :
(A) Clip board
(B) Task switching
(C) C Win App
(D) OLE


73. Which statement is not true about process O in the Unix operating system ?
(A) Process O is called init process.
(B) Process O is not created by fork system call.
(C) After forking process 1, process O becomes swapper process.
(D) Process O is a special process created when system boots.