Physical and logical arrangement of devices with a network is known as Topology.

A bus topology is a network setup in which each computer and network device are connected to a single cable or backbone.A signal from the source is broadcasted and it travels to all workstations connected to bus cable. Although the message is broadcasted but only the intended recipient, whose MAC address or IP address matches, accepts it. If the MAC /IP address of machine doesn’t match with the intended address, machine discards the signal.

A star topology is a topology for a Local Area Network (LAN) in which all nodes are individually connected to a central connection point, like a hub or a switch. A star takes more cable than e.g. a bus, but the benefit is that if a cable fails, only one node will be brought down. The central network device acts as a server and the peripheral devices act as clients. 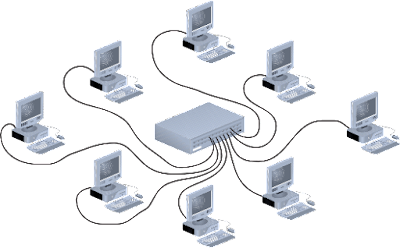 A ring network is a local area network (LAN) in which the nodes (workstations or other devices) are connected in a closed loop configuration. Adjacent pairs of nodes are directly connected. Other pairs of nodes are indirectly connected, the data passing through one or more intermediate nodes. Each packet is sent around the ring until it reaches its final destination. Ring topologies are used in both local area network (LAN) and wide area network (WAN) setups. The picture to the right is a visual example of a network using the ring topology to connect several computers together. 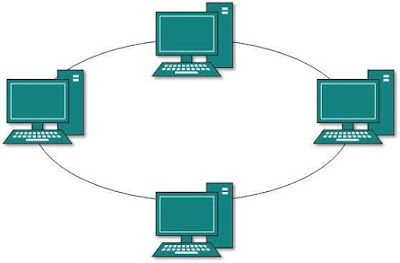 Token Passing (in brief) : Token contains a piece of information which along with data is sent by the source computer. This token then passes to next node, which checks if the signal is intended to it. If yes, it receives it and passes the empty to into the network, otherwise passes token along with the data to next node. This process continues until the signal reaches its intended destination.The nodes with token are the ones only allowed to send data. Other nodes have to wait for an empty token to reach them. This network is usually found in offices, schools and small buildings.