31. Consider the formula in image
processing 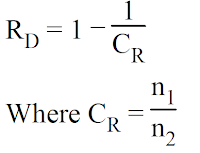 CR is called as compression ratio n1 and n2 denotes the number of information carrying units in two
datasets that represent the same information. In this situation RD is called as relative _________ of the
first data set.
(A) Data Compression
(B) Data Redundancy
(C) Data Relation
(D) Data Representation

Sometimes the space savings is given instead, which is defined as the reduction in size relative to the uncompressed size:

Explanation : Advanced encryption algorithm would be unclassified and had to be "capable of protecting sensitive government information well into the next century," according to the NIST announcement of the process for development of an advanced encryption standard algorithm.


The selection process for this new symmetric key algorithm was fully open to public scrutiny and comment; this ensured a thorough, transparent analysis of the designs submitted.


Security: Competing algorithms were to be judged on their ability to resist attack, as compared to other submitted ciphers, though security strength was to be considered the most important factor in the competition.

Cost: Intended to be released under a global, nonexclusive and royalty-free basis, the candidate algorithms were to be evaluated on computational and memory efficiency.

35. Let A and B be two n × n matrices. The efficient algorithm to multiply the two matrices has the time complexity

Tan2  is satisfied by