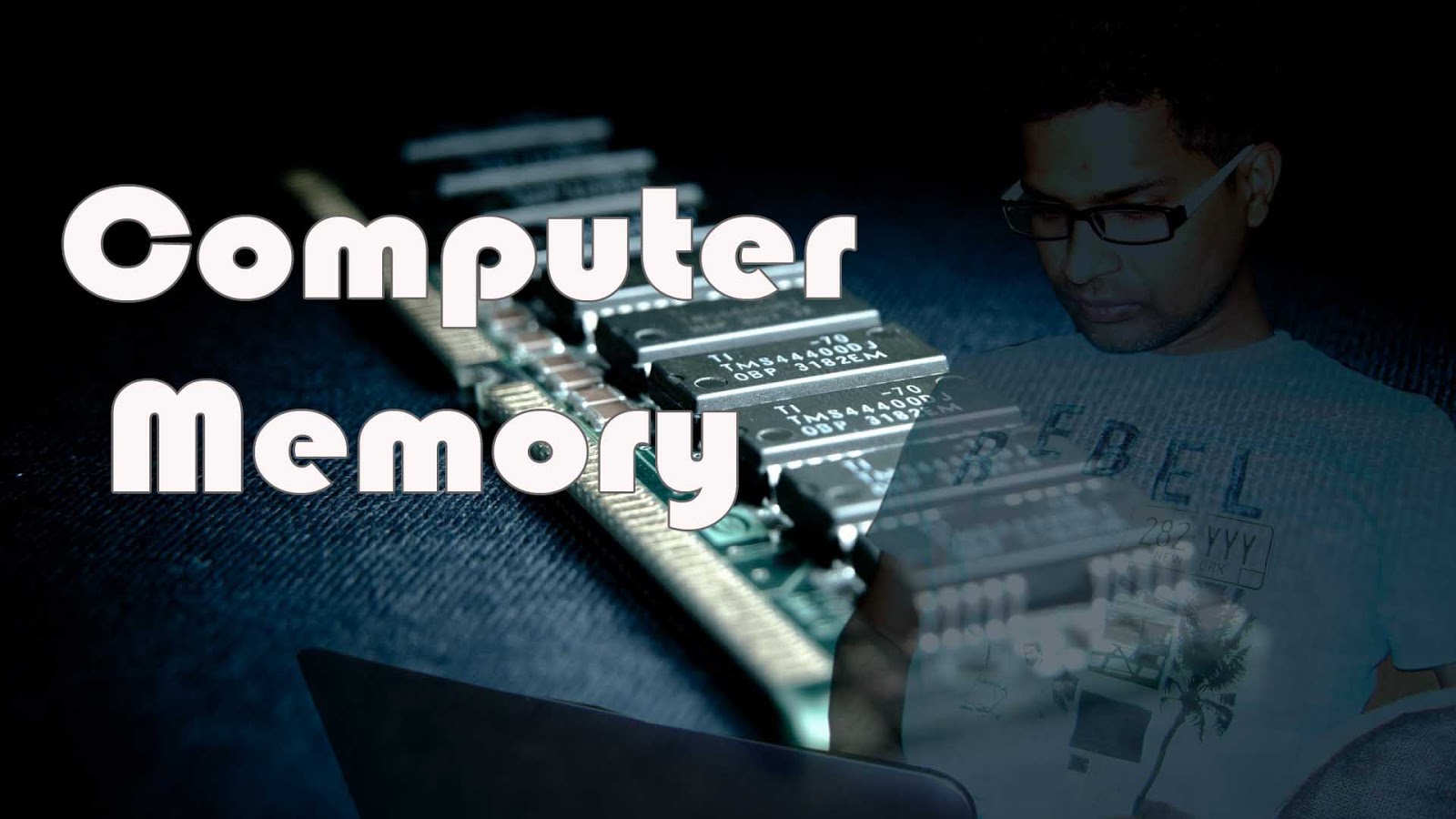 In computing, memory refers to the physical devices used to store programs (sequences of instructions) or data (e.g. program state information) on a temporary or permanent basis for use in a computer or other digital electronic device. The term primary memory is used for the information in physical systems which function at high-speed (i.e. RAM), as a distinction from secondary memory, which are physical devices for program and data storage which are slow to access but offer higher memory capacity. Primary memory stored on secondary memory is called "virtual memory".

Volatile memory is a type of storage whose contents are erased when the system's power is turned off or interrupted. For example, RAM is volatile; meaning users will lose a document if they do not save their work to a non-volatile classification of memory, such as a hard drive, before shutting down the computer.

Non-volatile is a term used to describe any memory or storage that is saved regardless if the power to the computer is on or off. The best example of non-volatile memory and storage is a computer hard drive, flash memory, and ROM. If data is stored on a hard drive, it will remain on that drive regardless if the power is interrupted, which is why it is the best place to store your data and documents. This is also how your computer keeps the time and other system settings even when the power is off.

Read-only memory (ROM) is a type of storage medium that permanently stores data on personal computers (PCs) and other electronic devices. It contains the programming needed to start a PC, which is essential for boot-up; it performs major input/output tasks and holds programs or software instructions.

There are numerous ROM chips located on the motherboard and a few on expansion boards. The chips are essential for the basic input/output system (BIOS), boot up, reading and writing to peripheral devices, basic data management and the software for basic processes for certain utilities.

1) Primary storage, also known as main storage or memory, is the main area in a computer in which data is stored for quick access by the computer's processor. On today's smaller computers, especially personal computers and workstations, the term random access memory (RAM) - or just memory - is used instead of primary or main storage, and the hard disk, diskette, CD, and DVD collectively describe secondary storage or auxiliary storage.
The terms main storage and auxiliary storage originated in the days of the mainframe computer to distinguish the more immediately accessible data storage from storage that required input/output operations. An earlier term for main storage was core in the days when the main data storage contained ferrite cores.
2) Primary storage is sometimes used to mean storage for data that is in active use in contrast to storage that is used for backup purposes. In this usage, primary storage is mainly the secondary storage referred to in meaning 1. (It should be noted that, although these two meanings conflict, the appropriate meaning is usually apparent from the context.)
Related glossary terms: hard disk, magnetoresistive head technology, yottabyte, serverless backup, byte, partition, InfiniBand, failover, RAMAC (random access method of accounting and control), Fibre Channel

RAM, or random access memory, stores information that is being processed and offloads it at a very fast rate to the motherboard of the computer so it can be sent to the northbridge, and then for use to the GUI (graphic user interface), which allows the user to access the information with the mouse, keyboard, monitor, etc.

Static random-access memory (SRAM or static RAM) is a type of semiconductor memory that uses bistable latching circuitry to store each bit. The term static differentiates it from dynamic RAM (DRAM) which must be periodically refreshed. SRAM exhibits data remanence,but it is still volatile in the conventional sense that data is eventually lost when the memory is not powered.SRAM is more expensive and less dense than DRAM and is therefore not used for high-capacity, low-cost applications such as the main memory in personal computers.

Dynamic random access memory (DRAM) is a type of random access memory that stores each bit of data in a separate capacitor within an integrated circuit. Since real capacitors leak charge, the information eventually fades unless the capacitor charge is refreshed periodically. Because of this refresh requirement, it is a dynamic memory as opposed to SRAM and other static memory.

The processor, also known as the CPU (central processing unit), processes information on your computer. In order to do this, it needs somewhere to store the memory, which in this case is the "cache memory." The cache memory transfers data at lightning fast speeds so it can be processed by the cores in the processor. The cache memory holds a lot less space than RAM, however. For example, a processor will usually have around 12 MB of cache memory, whereas RAM may have up to 4 GB per stick. However, the cache memory makes up for that in sheer speed. For instance, RAM will have a speed of 800 Mhz, while the cache memory can operate at 2.4 Ghz.

The processor registers are the smallest of all primary storage devices. Typically, they hold around 32 to 64 bits, which is good enough for very simple processes such as math calculations. However, the processor registers are the fastest primary storage devices as well. They are primarily used by the processor to handle calculations used to operate the programs. The larger processes involving software and operating system files are handled by the cache memory.

Secondary memory (or secondary storage) is the slowest and cheapest form of memory. It cannot be processed directly by the CPU. It must first be copied into primary storage (also known as RAM ).
Secondary memory devices include magnetic disks like hard drives and floppy disks ; optical disks such as CDs and CDROMs ; and magnetic tapes, which were the first forms of secondary memory.

Auxiliary memory, also known as auxiliary storage, secondary storage, secondary memory or external memory, is a non-volatile memory (does not lose the data when the device is powered down) that it is not directly accessible by the CPU, because is not accessed via the input/output channels (it is an external device). In RAM devices (as flash memory) data can be deleted or changed.

It is used to store a large amount of data at lesser cost per byte than primary memory, it is two orders of magnitude less expensive than primary storage.

CD and DVD drives used as optical storage devices. They have even longer access times. With disk drives, once the disk read/write head reaches the proper placement and the data of interest rotates under it, subsequent data on the track are very fast to access. As a result, in order to hide the initial seek time and rotational latency, data are transferred to and from disks in large contiguous blocks.
Other examples of secondary storage technologies

a pen drive is a portable Universal Serial Bus (USB) flash memory device for storing and transferring audio, video, and data files from a computer. As long as the desktop or laptop has a USB port, and the pen drive is compatible with the operating system, it should be easy to move the data from the hard drive to the device — and to another computer — in a matter of minutes. The drive gets its name from the fact that many have a retractable port connector like a ballpoint pen, and they are small enough to fit into a pocket. Other names include flash drive, jump drive, and thumb drive.

The actual transfer speed depends upon several factors, such as the computer's speed at reading and writing to the device. Generally, a pen drive's advertised speed is the reading speed because it is faster than the speed at which data can be written to it. Manufacturers usually list the speed in megabytes per second (MB/s). The age of the drive and how it's being used — such as for writing and erasing small files — also affects the transfer speed.

Equipped with a large amount of memory, the pen drive is often considered to be an improvement on both the older floppy drive disks and the more modern compact disks. They can transfer data much more quickly than these older technologies. Because they are solid state— there are no moving parts — flash drives usually last longer and the data stored on them is safer. Depending on the storage size, flash drives can hold anywhere from 128 MB to 32 GB or more; by comparison, a standard CD-ROM holds about 700 MB of data.

A memory card (sometimes called a flash memory card or a storage card) is a small storage medium used to store data such as text, pictures, audio, and video, for use on small, portable or remote computing devices.