Which is better between LCD screen and LED Screen

The differences between LED and LCD TV to a consumer as well as from the technical point of view are as follows:-
1. The viewing angle of LCD TV is less than that of LED TVs. LCD TVs are best viewed directly from in front and at the same plane as the screen i.e. a good view is not possible if viewed from the sides or from above or below the TV screen. LED TVs, on the other hand, has greater viewing angle. 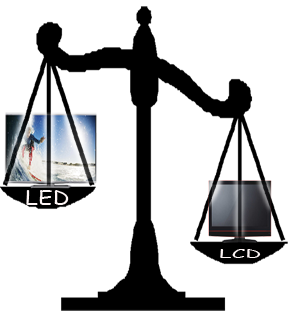 2. LCD TVs can not be viewed under bright environment whereas LED TVs can be viewed even under direct sunlight. This is so because, the screen of LCD TVs made up of liquid crystals which changes color on passing current though it. Unlike LCD TVs, LED TV screens are made up of Light Emitting Diodes. Therefore, each tiny dot of light (pixel) on LED TV screen is like a light bulb and its glow is visible even under direct sunlight. For example, LCD TVs have the same screens as mobile phones and is not clearly visible under bright sunlight. You must have noticed that some mobile phones have light (a mobile torch).This torch is made up of an LED and thousands of such 'torch' form the LED TV screen.

4. LCD TV is more durable than LED TV under normal conditions. It is so because LED TV consumes more power than LCD TV and more power means generation of more heat which is the ultimately factor of wear and tear in electronic devices.

7. On running the TVs on backup power sources like UPS and inverters or if the TV were to be installed on vehicles, LCD TV will give a longer backup than LED TV.

If performance alone is considered, than LED TVs are preferred over LCD TVs. But where budget and durability is concerned, LCD TVs stands.
Posted by Raj Kumar at Saturday, July 05, 2014