What is pointer? How is it initialized? What is indirection operator? What is the scale factor

Q : What is pointer? How is it initialized? What is indirection operator? What is the scale factor?

A pointer is a special type of variable which hold physical address of a non pointer variable.Symbol * is used to make a pointer variable. Programmer can change a variable value from another location with the help of pointer. Call reference is an example of pointer , in which  a variable physical address pass to a function and any change made inside of function direct affect actual value of passed variable due to pointer.

& (Address operator ) is used to assign address of a variable to pointer. * (Indirection Operator) is used to access value of variable point by pointer. 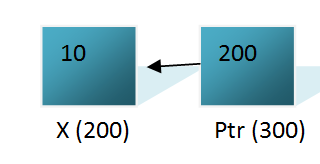 The indirection operator (*) is used to access  value of a variable indirectly through  pointer varable. The operand with * must be a pointer variable and result of the operation is the value point by the operand. The type of the result is the type that the operand addresses.


If the pointer value is invalid, the result is undefined. The following list includes some of the most common conditions that invalidate a pointer value.

A pointer is a special data type which holds address of a memory location. When add or subtract operator has applied on pointer then it will not work primary data types variable does. It get move place forward or backward depend on operator. Moving means pointer will get next variable address. See the picture.

An integer pointer always jumps two places by increment or decrement because of size of integer. A list of scale move of 16 bit compiler is on following table.

Only increment and decrement operator is allowed with a pointer for scaling.