A 'batch' is the name given to the task of doing the same job over and over again, the only difference being the input data presented for each iteration of the job and perhaps the output file.

Batch operating computer This kind of operating system requirement is common on a mainframe computer that was purchased specifically with massive repetitive data processing in mind. For example, a mainframe set up to process 30 million pension statements, each one calculated for a specific customer.

The users of batch operating system do not interact with the computer directly. Each user prepares his job on an off-line device like punch cards and submits it to the computer operator. To speed up processing, jobs with similar needs are batched together and run as a group. Thus, the programmers left their programs with the operator. The operator then sorts programs into batches with similar requirements.

Setting up a batch job is a bit like filling out a form, with specific details needing to be provided. Details include:-


The problems with Batch Systems are following.

Job Control Language (JCL) is a name for scripting languages used on IBM mainframe operating systems to instruct the system on how to run a batch job or start a subsystem.

A time sharing system allows many users to share the computer resources simultaneously. In other words, time sharing refers to the allocation of computer resources in time slots to several programs simultaneously. For example a mainframe computer that has many users logged on to it. Each user uses the resources of the mainframe -i.e. memory, CPU etc. The users feel that they are exclusive user of the CPU, even though this is not possible with one CPU i.e. shared among different users.

Multiple jobs are executed by the CPU by switching between them, but the switches occur so frequently. Thus, the user can receives an immediate response. For example, in a transaction processing, processor execute each user program in a short burst or quantum of computation. That is if n users are present, each user can get time quantum. When the user submits the command, the response time is in few seconds at most.

Note: The term 'Time Sharing' is no longer commonly used, it has been replaced by 'Multitasking System'.

This system looks to its users like an ordinary centralized operating system but runs on multiple, independent central processing units (CPUs).

These systems are referred as loosely coupled systems where each processor has its own local memory and processors communicate with one another through various communication lines, such as high speed buses or telephone lines. By loosely coupled systems, we mean that such computers possess no hardware connections at the CPU - memory bus level, but are connected by external interfaces that run under the control of software.

Below given are some of the examples of distributed operating systems:

5.  Mach/OS is a multithreading and multitasking UNIX compatible operating system;

The advantages of distributed systems are following.

The advantages of network operating systems are following.

The disadvantages of network operating systems are following.

Network OS is used to manage networked computers, means there would be a server and one or more computers will be managed by that server like in your college,
you might have got one dedicated server and it will manage your individual computers or laptop. 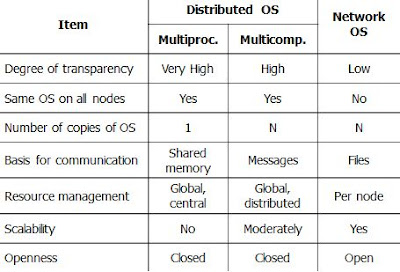 A real-time operating system (RTOS) is an operating system that guarantees a certain capability within a specified time constraint.The time taken by the system to respond to an input and display of required updated information is termed as response time. So in this method response time is very less as compared to the online processing.

Real-time systems are used when there are rigid time requirements on the operation of a processor or the flow of data and real-time systems can be used as a control device in a dedicated application. Real-time operating system has well-defined, fixed time constraints otherwise system will fail.For example Scientific experiments, medical imaging systems, industrial control systems, weapon systems, robots, and home-applicance controllers, Air traffic control system etc.

There are two types of real-time operating systems.

Example: A practical example would be your Mobile phone when you try to find out a phone number and you expect your phone to respond in a timely manner. However, if it takes much time to respond rather than the few milliseconds nothing catastrophic will occur. Perhaps you may shut down some apps to make it fasters.